Next Level Court Reporting: Why A Video Deposition is Worth It 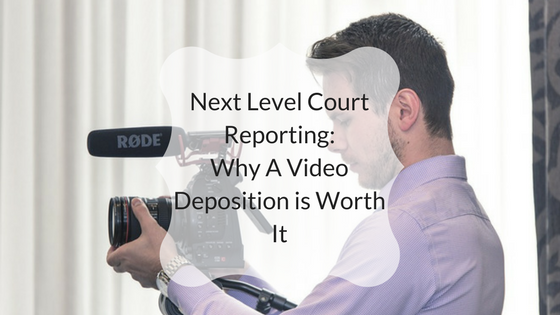 Whether it’s a civil or criminal matter, court reporting is an essential aspect of winning your case. When breaking down the duties of a court reporter, though, the deposition is often considered to be one of the most important. The deposition ensures that you preserve witness testimony while avoiding any surprises at trial, but not all depositions are created equal. Court reporters that seamlessly provide video deposition services are often the most cost effective providers and in many instances the memorialized video deposition greatly increased the attorney’s chance of success thanks to the numerous benefits provided.

Benefits of a Video Deposition

When it comes to deposition services, video testimony provides the greatest tool for both witness presentation and impeachment. Every litigator has been in the position of having to read deposition designations to point out inconsistent witness testimony or when a witness is unavailable. By and large, jurors can become bored by the monotony of this practice. Also, this does not capture the person who is speaking and thus leaves the “witness” to the juror’s minds eye.

This problem, however, doesn’t exist when a video deposition is available. When you can show the judge or jury the witness speaking clearly into a camera, it becomes much more difficult for said witness to claim they didn’t understand the question or context, or even claim that their words were twisted or misconstrued. Video also provides you the opportunity to protect your own witnesses’ credibility if opposing counsel tries to manipulate what they said.

Additionally, court reporters who provide video deposition services help you gain a more in-depth deposition than with just a transcript alone. Far too often, witnesses will get off track when speaking during a written deposition. Their and their attorney’s knowledge that jury members will never see the actual conversation sometimes results in getting off the subject and a meandering testimony. When everyone understands that the deposition will be recorded, though, they’re more likely to “stick to the script.”

This allows you to streamline the deposition and come away with a cleaner transcript for use at trial or briefing. Depositions can last as long as necessary, but having the ever-watchful eye of a video camera motivates everyone involved to focus on getting all of the pertinent facts committed to evidence in a timely manner.

While video deposition services provide a variety of benefits on their very own, the actual power of video becomes far more apparent when compared to paper depositions. One need only look at basic human psychology and brain functioning when comparing video depositions to their paper counterparts. Science has shown that the human brain processes video 60,000 times faster than it does text.

What this means is that judges and juries will be able to get a deeper understanding of what’s going on instantaneously. Fortunately, this benefit doesn’t just extend to judges and jury members. You will also be able to review a deposition and prepare your case in a more time-efficient manner than if you tried to sit down and pore back through volumes of written statements. And as any attorney can rightly attest to, time is money in the legal field.

In addition to being more cost-efficient by allowing you to more effectively use your preparation time, video deposition services also save on costs thanks to the ability to present testimony from witnesses whose location or medical condition makes bringing them into court both financially and logistically prohibitive.

Maybe the biggest benefit of video depositions over paper depositions, though, is the ability to gain a deeper understanding of testimony by viewing body language. If you read a statement that says “I didn’t owe her any money” in court, it doesn’t say nearly as much as seeing the witness saying the same thing while rolling their eyes, sucking their teeth, and acting otherwise dismissive or insulting.

No matter what, being able to view a witness’s body language in addition to their words can speak volumes. This is why good court reporters will always use high-quality video depositions — preferably with multi-camera views so courtrooms will have every vantage point possible.

Video Depositions Are at the Forefront of Technology

Like most great industry tools, video deposition services don’t stop at basic functions. As technology evolves, so do video depositions. At Magna, for instance, the most up-to-date technology is utilized to provide video teleconferencing (VTC) and/or internet streaming services when performing video depositions via the Magna Legal Vision platform.

Since businesses using VTC and similar services reduce travel expenses by 30 percent, these techniques are beneficial both economically and technologically. In addition to utilizing the most advanced aspects of video technology, Magna also offers multimedia depositions. This means that trial exhibits can be displayed directly to the deposed while they’re offering a statement.

On top of all of this, the multimedia advancements utilized by Magna allow witnesses to annotate exhibits as they’re being deposed. This can turn into a powerful tool later at trial when the court sees the witness writing their own words via touchscreen monitors in relation to the exhibit at hand. And if this wasn’t enough, just imagine how powerful these multimedia tools can be in the hands of expert witnesses.

Video Deposition Is the Right Move

After utilizing video deposition services, it’s highly unlikely that you’ll ever want to switch back to paper and ink. Benefits, which range from pretrial to closing arguments, are just too numerous to overlook. Make sure you find a court reporter who offers video depositions in addition to the other tools you’d expect from a professional legal service agency.

The Viability of Virtual Jury Trials

In May 2020, a Texas court held the nation’s first jury trial via Zoom. This Magna Legal Services panel discussion, […]

There are always important rules and guidelines to follow when retrieving medical records. When retrieving records due to a car […]